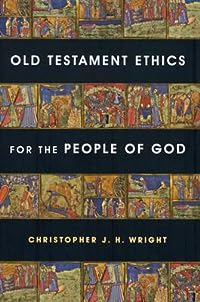 Old Testament Ethics for the People of God

Others abandon its teaching altogether in favor of a strictly New Testament ethic.

Then he explores a variety of themes in relation to contemporary issues: economics, the land and the poor; politics and a world of nations; law and justice; society and culture; and the way of the individual.This fresh, illuminating study provides a clear basis for a biblical ethic that is faithful to the God of both Testaments.

Instead, he takes the Old Testament as we have it, as the revealed word of our God, and then examines what it means for us today from three angles: - paradigmatic: the view that 'God's relation to Israel in their land is a deliberate reflection of God's relationship today to humankind on earth' - a view he particularly favours and which leads him to place a high emphasis on the socio-economic aspects of the Old Testament, particularly God's sense of justice - eschatological: the view that God's redemption through Israel will ultimately embrace all nations - typological: the view that the promises of the Old Testament to Israel are fulfilled in Christ and the wider Christian church He avoids the temptation that often arises in theological books to spend time arguing with others' intepretations, indeed he is generous in his citing of other's who have wrestled with the same issues, and reserves a survey of dissenting views from his own to a chapter towards the end. Even then he is relatively kind in his commentary, although perhaps his sharpest rebuke is reserved for the theonomist / Christian reconstructionist school of thought from the US, and, in particular, their selective view that while e.g. the sexual norms of the Old Testament apply today in toto, the teachings in the economic sphere have no relevance.

This one was so good I just had to savor it. The section on politics will be of particular interest to those who hold to the "Christian Reconstruction" views of the likes of Rushdoony and such folk. He has quite a lengthy section on that view, and does a good job of dealing rationally and fairly with the problems associated with it - problems, I noticed, that James Jordan and Peter Leithart (both former Reconstructionists who abandoned the project early in the 1980s) have also noticed and pointed out.

I'm not sure how to begin describing the scope of this book - it's just plain brilliant, to use non-scholarly language.

Instead he looks at the principles animating the Old Testament ethic and spends a good deal of time talking about how and why it is applicable today, while forcing the reader to draw the necessary conclusions for his own life.

This excellent book (unfortunately, out of print) deals with Old Testament law as it applies to today's ethical issues.

In doing so we are able to get in the mind better of people at that time and try and understand why certain items have only been recently questionable to our modern ears.

This is a wonderful systematic overview of Old Testament ethics by an evangelical Christian, but one who's actually able to recognize that the OT law is hardly a blueprint for libertarian capitalism.