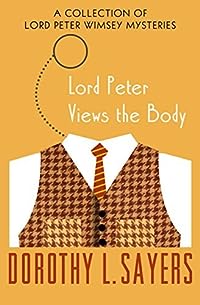 In this delightful collection of Wimsey exploits, Dorothy L. Sayers reveals a gruesome, grotesque but absolutely bewitching side rarely shown in Lord Peter's full-length adventures.Lord Peter views the body in 12 tantalizing and bizarre ways in this outstanding collection. He deals with such marvels as the man with copper fingers, Uncle Meleager's missing will, the cat in the bag, the footsteps that ran, the stolen stomach, the man without a face...and with such clues as cyanide, jewels, a roast chicken and a classic crossword puzzle.

What People Think about "Lord Peter Views the Body"

The third short story in the book contains a crossword puzzle laid out by a clever old man in his will. I thoroughly enjoyed this book of short stories and novellas and for people who may be interested in the series but not certain, this would be a good place to start!

As a result, I approached this book innocently assuming I would encounter another full-length Peter Wimsey adventure to delight in. I'm glad it worked out this way, however, because I rarely choose to read short stories voluntarily, and these were just as delightful as Peter's full-length exploits.

Otherwise, this was, of course, a ton of fun, and my personal favourite would have to be the one featuring Wimsey's nephew St George at the tender age of ten.

Im also enjoying Peter Wimseys evolution over the course of these bookshe started out a bit dim, rather like Wodehouses Bertie Wooster, but he has gradually become much more like an Agatha Christie protagonist or Conan Doyles Holmes, being able to put the puzzle pieces together faster than the average person, when the picture is still a bit hazy.

This book contains 12 mysteries featuring Dorothy Sayers' famous sleuth, Lord Peter Wimsey and each was unique in its own right and all were interesting and entertaining. Lord Peter is such a wonderful character and the stories helped develop his character even more.

The Abominable History of the Man with Copper Fingers Man at club describes warning he got from a mysterious stranger; said mysterious stranger pipes up to offer the rest of the story. Ultimately: Peter likes to make a goddamned entrance, doesn't he? I couldn't follow any of the wine tasting expertise (my palate is comprised of Swedish Fish and oversteeped black tea I am no gourmand) but I enjoy Peter going undercover immensely. The Learned Adventure of the Dragon's Head Definitely enjoyed Peter becoming the "cool uncle" by virtue of guns and sneaky-doings. The Unsolved Puzzle of the Man with No Face I don't know how I feel about a puzzle that doesn't truly resolve itself; Peter's fairy tale is meant to be the truth but it is left as a nebulous 'what-if' that rather short-sheets the ending. (I didn't like this: all the good bits about investigating and how Peter figured out everyone's names and identities and how he set up and sprung his trap were left out, giving us only an unearned denouement and a lot of questions about the missing TWO YEARS?????