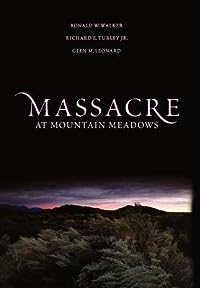 Drawn from documents previously not available to scholars and a careful re-reading of traditional sources, this gripping narrative offers fascinating new insight into why Mormons settlers in isolated southern Utah deceived the emigrant party with a promise of safety and then killed the adults and all but seventeen of the youngest children.

It also analyzes the influence of Brigham Young's rhetoric and military strategy during the infamous "Utah War" and the role of local Mormon militia leaders in enticing Paiute Indians to join in the attack.

The Mountain Meadows Massacre stands as one of the darkest events in Mormon history.

Neither a whitewash nor an exposï, Massacre at Mountain Meadows provides the clearest and most accurate account of a key event in American religious history.

What People Think about "Massacre at Mountain Meadows"

Turley (at the time Assistant Church Historian, but now Managing Director of LDS Public Affairs), and Glen M. The amount of access to church archives and history has changed considerably between the 1950s and the 2008. It is interesting to note that while Juanita Brooks was never formally disciplined, she WAS blackballed from Church publications when writing her work. I know that Bagley's account places even more responsibilty on Brigham Young's shoulders.

First and foremost, let me make clear my personal opinion on the key issue that separates spectators of the Mountain Meadows Massacre: Brigham Young did not explicitly give the order to attack and kill the Fancher Party. Having gotten that formality out of the way my general opinion of this book is that it is essentially a response to Bagelys Blood of the Prophets well disguised as an academic historical work. Not that Massacre at Mountain Meadows isnt well researched it is, but it is unsatisfactory in the sense that it adds so little to the existing historical record for supposedly so much dedicated research and the authors claim to previously unavailable source material. The authors are able to claim their work is based on primary source material and "primarily not a response" to Bagely precisely because the prima facie documentary evidence is that Brigham Young did not explicitly order the attack. A more subtle example is where the authors take issue with a Bagely conclusion by stating Brigham Youngs invitation for Indians to take cattle was a generalized war policy, not an order to massacre the Arkansas company. The authors work does provide some insight into precipitating events from records of Church documents, although none aside from Brighams Youngs exculpatory letter address the massacre itself. The book strives to clear Brigham Young of any explicit or implicit order to kill the emigrants and places blame squarely on John D. In this work we are told that Lee committed atrocious acts yet Young forestalled his restitution for twenty years and the Church reinstated Lees membership and temple blessings posthumously in 1961 certainly long after Mormon folklore regarding the massacre was known to be false to the First Presidency. It is not acceptable for the authors (or the Church) to merely recite Brigham Young didnt order the attack over and over again in defense of their latter day prophet. The authors leave this subject for a supposed second volume.: The catharsis that Mormon Church leaders want in regards to the Mountain Meadows Massacre remains elusive because justice is unfulfilled.

A book of narrow but dramatic interest, Massacre at Mountain Meadows contains the most complete historical record of one of the bleakest events in the history of the Mormon settlement of the West. Because of this enmity, the Mormon church refused to be open with hostile investigators and later historians because they perceived a desire to unfairly persecute the church. So it is a relief that enough time has passed that the Mormon church was finally willing to open its entire archive collection from the time period to a trio of historians who surfaced every piece of relevant information possible to reconstruct what likely happened in the Mountain Meadows so many years ago.

The book is well written, and it gives an in depth look into the Massacre, early Mormon settlements and the American West. But it almost seemed like the authors spent more time weaving the reader into the web of complexity than making hardliner conclusions. 3b) It also seems like they spend a lot of time trying to absolve Brigham Young. Overall, I think the book was well written and documented the Massacre with diligence. However, I feel like there needed to be coverage of the aftermath and less time spent on some of the web-weaving.

But I feel compelled to learn and understand how events and circumstances could unfold in such a way that a group of mostly honest and good people could abandon their values and principles in order to commit the atrocity described by this book. After reading this book I feel, for the first time since learning about this tragedy many years ago, that I can finally, in a small way, understand the states of mind of probably most of the perpetrators.

After reading Walker, Turley, and Leonard's new book on the Mountain Meadows massacre, the Mormon 9/11 (September 11, 1857), my answer to the question posed above, albeit with a few reservations, is "yes." The authors announce in their preface that "Church leaders supported our book by providing full and open disclosure" (xi), which is to say that previous writers on this topic such as Juanita Brooks and Will Bagley, did not have such total access. The authors have chased down virtually every fact available about the tragic events leading up to the massacre of 120 men, women, and children that took place at Mountain Meadows, one of the most quiet, lovely places I have ever visited. Two large arguments shape this history: first, Brigham Young did not give the order to kill the wagon train of Arkansas emigrants; and second, the violence at Mountain Meadows, however deplorable, fits a common pattern that repeats all too often in human history. Reducing this mass murder to a common historical pattern for such acts of violence should raise another question for Mormon readers, and especially for the authorities that lead them. The implications to me seem clear: uncritical obedience to authorities who claim special access to God's will can set the stage for moral atrocities.

I thoroughly enjoyed reading this novel about an extremely unfortunate incident in the history of the Mormon church. The method of how the ambush was carried out is truly harrowing, as is its description.

My reaction: - Surprisingly lean telling of the story, at times even tedious - Authors stuck close to the script; did not engage other historians much - which was a little hard actually - Overall I felt a fair and honest telling - Disappointing to stop abruptly with Lee's execution, leaving the LDS coverup and denial largely untold Sharman and I visited the Mountain Meadows memorial site a year ago - I had not been there before.

What I really disliked was how the authors made it so that most of the blame was on the Pauite Indians not the militia.

The most thoroughly researched, unbiased book available on this difficult subject.