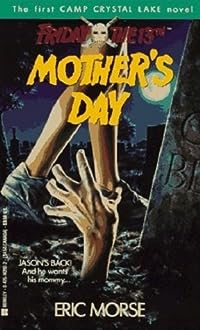 With Mother's Day just around the corner, Billy Boone and his friends set out on a camping expedition to Crystal Lake, unaware that Jason's mother continues her quest for revenge and that a hunter is stalking the teenagers at the camp.

What People Think about "Mother's Day"

* Suzanne - friend of Carly, hippie tie dye meditative type, one half of Kyleandsuzanne (one word). * Kelly Boone - captain of the varsity basketball team, Carlys friend since she joined the team, younger sister of token bad boy. * Monique - transfer student from Paris, has a talent for making guys drool, token tease / is she or isnt she going to sleep with every guy she meets? * Albert - loveable nerd who appears to live his life in the friend zone, Pauls unfortunate roommate whos designated to the couch whenever Paul is entertaining the ladies (so always), token fat kid who is bullied for his weight (I seriously have no idea why this kid is at this weekend away when he could have been enjoying some quality alone time while he packed his stuff and changed dorm rooms). * Suzanne - As one half of Kyleandsuzanne (one word) she has sex with Kyle so shes a goner. * Kyle - As the other half of Kyleandsuzanne (one word) he has sex with Suzanne so hes also toast. * Kelly Boone - Shes at home sick so doesnt venture anywhere near Camp Crystal Lake until the second book which I havent read yet.

The only time you're safereally safeis when you're dead." Paul Sexton, Mother's Day, P. While the events of Mother's Day can't be pinpointed for certain on the Friday the 13th timeline, when Boone is relating the legend of Jason Voorhees to his friends at what used to be Camp Crystal Lake, his telling of the story seems to suggest that this book may take place following shortly after the ninth film in the franchise, Jason Goes to Hell: The Final Friday. Though the "never to return" idea may not have proved true, Boone's story does line up with the end sequence of Jason Goes to Hell, when another infamous killer makes a surprise appearance and appears to take control of Jason into the netherworld. So, with Jason effectively neutralized before Mother's Day even begins, what more can happen on the grounds of notorious Camp Blood? Jason has murdered, been killed and then come back to life a number of times, wiping out new batches of camp counselors and backwoods oddballs over and over again, but despite the overexposure of his story to the public, there is still more truth to be uncovered. Another bit of continuity confusion surrounds the part that Pamela Voorhees's head plays in Mother's Day. In Friday the 13th Part II, it was totally lifeless, a long-dead limb that Jason kept around only because he didn't understand the concept of death, and wanted to have his mother with him. Overall, however, I was really pleasantly surprised by Mother's Day. As a horror story it is much like the Friday the 13th films, a time capsule of teen culture from the year the book is set.

It reminded me very much of the 80's horror movies I love.

So, they took two routes: one, that Crystal Lake is so corrupted that the entire land is cursed and doomed and destroying everybody who wanders into it, and two, that the hockey mask worn by Jason allows for a sort of possession that allows this curse to have a face and a story so the victims can fight back instead of just escaping.

I work in a library and as I was reading the YA shelves I found this book squeezed in with all of the angsty, teen, romance/sci-fi/coming of age books.

MOTHER'S DAY, the first in what ended up being a 4-book YA/Friday the 13th tie-in series by Eric Morse, is actually pretty good.

I first read this book when I was like 15.