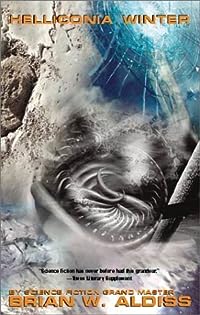 This is the final volume of the Helliconia Trilogy -- a monumental saga that goes beyond anything yet created by this master among today's imaginative writers.

The centuries-long winter of the Great Year on Helliconia is upon us, and the Oligarch is taking harsh measures to ensure the survival of the people of the bleak Northern continent of Sibornal.

What People Think about "Helliconia Winter"

This is a world that has not left me since I read Helliconia Spring. It is an immense tapestry of story and world, threads from centuries ago resurfacing for some small relevance in a new setting created by the position of a planet relative to two suns.

When asked by his publisher about the underlying theme of his recently-published trilogy, Brian Aldiss replied in the most English way possible: a change in the weather.

3 stars Metaphorosis Reviews In Helliconia Winter, Brian Aldiss finally settles into the human-scale story he approached in Summer. While an improvement on its predecessors, Winter is not a strong book.

Technology hasn't quite advanced as far as one would hope either; this is a few centuries after Summer and I'd have thought they'd have got as far as steam engines (there is a very brief mention of some primitive railways) if not electricity, but they aren't quite there and will obviously be knocked back again by the deteriorating conditions. However, the second half is dominated by asides covering deteriorating conditions on the Avernus and indeed a lot of future history, and philosophy, on Earth itself. An enjoyable conclusion to the series and better than "Summer" though the very nature of Helliconia's Great Year means the end is with a sombre mood as civilisation girds its loins for the impending centuries of cold, even while surrounded by summery murals and in snow covered fields called "the vinyard".

4.5 stars from Jesse, read the full review at FANTASY LITERATURE Like an architect seeing a cathedral theyve designed have the steeple raised, or an engineer watching the bowsprit attached to a ship theyve built, so too must Aldiss have felt writing the final chapter of Helliconia Winter (1985). Like Helliconia Summer, Helliconia Winter does not pick up the story where the previous volume ended.

The books share very few plot lines, but closely follow the changes of an entire ecosystem across three seasons, so should be read in order.

I liked Spring and Winter - not very much, but I liked them.

Helliconia is a planet orbiting a star (Batalix) distant from Earth, in a highly elliptical orbit about a binary companion (Freyr). However at the end of the third book, set in Sibornal, at a latitude similar to the UK on Earth, Freyr is depicted as sinking below the horizon, not to rise again for many centuries. Which I'm pretty sure humans would have noticed by now, and all migrated to the country where Freyr is visible during the Great Winter, and invisible during the all-too-hot summer. In Helliconia's biology, humans are depicted as (view spoiler)having evolved from Others (monkey-alikes), having been kept as pets by the native Helliconian species, the phagor. When you're seeing clues as small as the stripes on the skin of hoxneys, the colours of the hairs of aging phagors, or the linguistic similarities between some words in the (utterly unpronounceable) human and phagor languages, expecting the reader to ignore that the chance of totally unrelated humans evolving separately on two planets is vanishingly small...

Brian Wilson Aldiss was one of the most important voices in science fiction writing today.