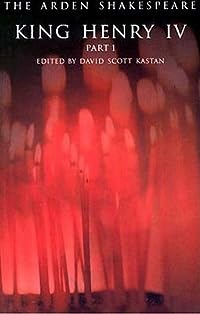 David Scott Kastan lucidly explores the remarkable richness and the ambitious design of King Henry IV Part 1 and shows how these complicate any easy sense of what kind of play it is. Conventionally regarded as a history play, much of it is in fact

I was struck with two parallels, however--one within the play itself, and one within Shakespeare's body of work. First of all, I appreciated the subtle parallels between the Hotspur-Glendower and the Hal-Falstaff scenes. (Like I said, this isn't that important, but it is interesting how a great dramatist can use similar materials in support of very different effects.) Speaking overall, I am once again astonished by the great command of voices that Shakespeare demonstrates in this play.

Shakespeare does love to point out a good hypocrite. In the rebellious Hotspur King Henry clearly sees part of himself, and in his son he sees a foe he vanquished many years before. Fallstaff rather hilariously, whilst pretending to be Henry IV, gives young Hal some advice about his drunken friend: No, my good lord, banish Peto, banish Bardolph, banish Poins, but for sweet Jack Falstaff, kind Jack Falstaff, true Jack Falstaff, valiant Jack Falstaff, and therefore more valiant being, as he is, old Jack Falstaff, Banish not him thy Harrys company, Banish not him thy Harrys company. A good King knows how to communicate with his subjects not just the other rulers of the land, just a bit of subtlety from the bard. Is it personal integrity or is it loyalty to your King, and perhaps those you love. As with all of Shakespeares plays, watching a good version really helps. I did quite like this play, but I much preferred Richard II.

William Shakespeare, King Henry IV, Part 1 Falstaff! Obviously, Henry, Prince of Wales plays that part (and he is fascinating himself) but Falstaff just dervishes around the play making everything better. Some of Shakespeare's great lines and great musings jump energetically from Falstaff's lips: "Well, tis no matter; honour pricks me on. Yea, but how if honour prick me off when I come on? No. Honour hath no skill in surgery, then? What is in that word honour? What is that honour? What is that honour?

The first part of Henry IV tells the events of the rebellion of the barons, following the lead of young Harry Percy, against the king they initially placed on the throne of England. It is probably the endearing relationship between Prince Hal and John Falstaff, at the start, that makes this one of my favourite plays of William Shakespeare.

;) Our favorite wastrel, Prince Henry, Hal to his friends, a drunkard, a thief, the bosom buddy of dear fat old Falstaff, hides his bright sun behind vile clouds so as to shine all the brighter when his day finally arrives. In here, of course, we establish the lout with a sharp mind and careful cunning, dissembling for all to see but careful of the long game.

The comedy also helps; and this play contains some of Shakespeares highest and lowest comedy, both of which are embodied in the corpulent Falstaff. There are those who see in Falstaff the spirit of carnivalthe ecstatic embrace of all the pleasures of life and the total rejection of all the hypocrisies of society. Still, I cannot help thinking that, if the Falstaffian attitude were embraced too widely, society itself would be impossible. In any case, Falstaff is not the only great character in this play.

There is lots of intrigue from influential families such as the Percys and Henry's own son is giving him a headache or two as well (since scandalous behaviour makes people question the worthiness to the throne). But soon, there is an outlet for all the pressure boiling up because the intrigues against King Henry IV result in a battle at Shrewsbury. Funnily enough (literally because they are comic relief in my opinion), completing the trio is King Henry's son and his friends (yes, including the fat and drunk Falstaff who is no longer charismatic in my opinion, but acts most shamefully). I must say, I didn't like Hal (Henry's son) very much.