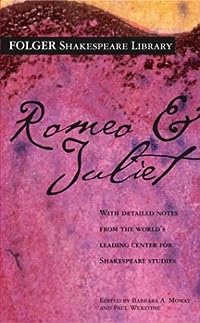 In Romeo and Juliet, Shakespeare creates a violent world, in which two young people fall in love.

And yet, this play set in an extraordinary world has become the quintessential story of young love.

What People Think about "Romeo and Juliet"

Romeo and Juliet, abridged. MERCUTIO: Okay, three things: One, theres only room in this play for one awesome character and its me, bitch. Im in love with Romeo Montague we met yesterday and it was HOT. JULIET: *stamps foot, runs off to her room to watch High School Musical again and sulk* TYBALT: Hey Romeo, your mother was a hamster and your father smelt of elderberries! *Romeo attempts to stop the fight and fails miserably* MERCUTIO: FUCK YOU ALL! *dies* ROMEO: Okay, forget what I said about not fighting. Im banished and Juliet is going to marry another guy and its not fair WHY DOES GOD HATE ME? Romeo goes back to the tomb (pausing to kill Paris just for good measure), but he thinks Juliets dead and drinks poison and dies, and then like two seconds later she wakes up and sees that Romeo isnt mostly dead like she was, hes dead, so she stabs herself.* MONTAGUE: Wow, we are awful parents.

I'm not sure what annoys me more - the play that elevated a story about two teenagers meeting at a ball and instantly "falling in love" then deciding to get married after knowing each other for one night into the most well-known love story of all time, or the middle schools that feed this to kids of the same age group as the main characters to support their angst-filled heads with the idea that yes, they really are in love with that guy/girl they met five minutes ago, and no one can stop them, especially not their meddling parents! It's not clear how old Romeo is, but either he's also a stupid little kid who needs to be slapped, or he's a child molester, and neither one is a good thing. If we had decided the day after meeting each other that we were hopelessly in love and needed to get married immediately, we would have been idiots, and I hope someone who I trusted and respected would have slapped me, hard.

So, when the story opens, Romeo is desperately in love with Rosaline. His boys drag his sad ass to a party, and across a crowded room, Romeo spies his next victim...er, his really-really for real this time True Love. Well, he's old enough to kill Juliet's cousin in a sword fight, so...yeah. Tragically, Juliet is a Hatfield, and Romeo is a McCoy. Their families have been feuding over a McCoy pig that was killed during a Hatfield moonshine run decades ago. This time around, Romeo isn't going to make the same mistake as before, and let the new girl of his dreams slip through his fingers... Well...Ish. You know, I can't help but wonder what that first encounter would've been like if they'd met when they were older? Between Romeo & Juliet both crying, moping, and twirling around like a tweenage girls and the rest of the cast flailing around to accommodate these idiots, this was waaaaaay better than I remembered it.

One of the main arguments that come across is the 'meeting, falling in love, and dying all in a weekend when Juliet is but 13'. Perhaps the two lovers weren't truly in love, but their last living moments were spent believing so, so what does it matter?

This plot comes right out of Romeo and Juliet which features the Montagues and Capulets of Verona who have been feuding for time eternal. The star-crossed lover unique aspect of this play allowed me to read it quicker than I would with other Shakespearean drama that I find tedious to get through at best. The story of star-crossed lovers Romeo and Juliet and the consequences of their relationship could be completed in one to two acts. Perhaps because I am reading this drama during the 21st century where people need information before it happens makes plays with more speaking than action too slow at times for modern readers. After rereading a number of Shakespearean plays over the past few years I have come to realize that unless there is a lot of plot development-- feuding, fighting, falling in love, illicit marriage, more fighting-- that it is a challenge for me to get through the text. Shakespeare's story of star-crossed lovers remains timeless classic that has been redone many times over. Whether I read another Shakespeare remains to be seen because at the end of the day, if there are no feuds, fights, star-crossed lovers, and other elements of a modern story, Shakespeare's long soliloquies are not really my taste.