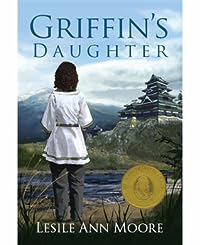 An ancient evil searches for her.A young girl lives as a social outcast due to her mixed human and elven blood.

To escape an arranged marriage, Jelena flees into the unknown on a quest to find her elven father.

What People Think about "Griffin's Daughter"

When I was a teenager, I loved reading the romances written by Phyllis Whitney and Victoria Holt. But, she wraps up the love story nicely and the book is very satisfying as it is.

The only weak spot (a pet peeve of mine) is the women guards who are the equal of men. In Moore's defense, I will say that there were a lot more male guards than female, but that part didn't sit well with me at all, obviously. The parents seem to know everything that is going on, yet have a huge blind spot where this guy is concerned.

One of the great things about GoodReads is you are introduced to authors and books that you might not normally find. While I'm not a huge fan of romance I enjoyed the story and the author had a very straight forward easy style. I already have the second Griffen's Shadow and I'm looking forward to reading it as soon as I can get past some of the books I already have in process.

While I personally am not an ardent fan of romance, Moore did have enough traditional elements in her story to keep me interested. I would suggest this book mostly to those interested in love stories about good people plagued by troubles who would like an added level of depth.

It's simply that until you get to the last book you get the feeling that you're spinning your mental wheels waiting for things to happen. Because humans and elves don't get along, she's raised by a maid even though she is the niece of a powerful duke. The story kind of drags on for a while so that the reader learns the scene at the beginning of the book is related to Jelena (duh!) and Magnes, who isn't accepted by the elves, returns home where tragedy strikes. Well written, but an introduction nonetheless. If you're into trilogies and can wait for something to happen, you might enjoy this book.

I am also interested in seeing Jelena and Ashinji further explore their magical talents. The main characters - Jelena, Ashinji, and Magnes - are likable. They are developed well enough that I felt like I knew them and was interested in getting to know them better. I would be interested in knowing more about the differences between the human and elf cultures.

I would have liked to see a much longer interaction between the two and then have them fall in love. 2 - I liked the "class struggle" parts of the book - the whole "half-breed" prejudice is a time honored theme and I thought the author did well with it.

One of my pet peeves with trilogies these days is how the authors seem to force you into reading the whole trilogy in order to get a complete story. And as I already mentioned, Leslie is a good writer and I expect to see her just get better and better as she progresses.

I could - and probably will - read the next books - goodness, they are free and quick reads, I'm just not expecting wonderful.

I grew up with horses, so 'pretty pink ponies' can ruin a book for me.

Characters constantly walk onto the stage of my mind, introduce themselves, and talk to me about their lives. Be open-minded, non-judgmental, and loving and we can connect.