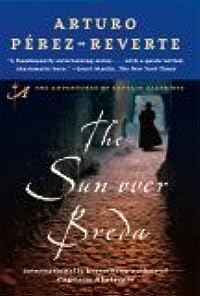 The Sun Over Breda

With no promise of payment from the king, Alatriste is caught in the impassioned throes of mutiny, torn between fealty to the material needs of his men and his pledge to a crown for which he holds no love.The Sun Over Breda is both a literary feast and a swashbuckling adventure that captures the tumultuous descent from the Spanish Golden Age, the bedlam of the Thirty Years' War, and the passion and valor of Captain Alatriste, a hero for the ages.

What People Think about "The Sun Over Breda"

I guess I just want a really good historical swashbuckler with a bit of meat on it and despite having been generally underwhelmed by each book in the series so far I keep hoping that Perez-Reverte warms up in the next one. We see him from a remove as it is given that almost everything is coming from Inigo's point of view, but when you add to that the taciturnity of Alatriste which sometimes borders on the ridiculous then it's really hard to identify with the titular 'hero' of the series. A mention is made of Alatriste's past, when he was apparently more adventurous and outgoing, and I found myself wishing Perez-Reverte had written a story about *that* epsiode which would have had the virtue of being more exciting and not having to filter everything through the eyes and mouth of Inigo.

By coincidence, I read this book in December in Belgium, of which Brel said: "With a sky so gray a canal got lost, with a sky so low a canal got hanged, with the damp westerlies, listen to her hanging in there, this flat country which is mine." I knew the story of the Flanders campaigns, the siege of Oostende and the sack of Antwerpen, from the point of view of Tÿl Uilenspiegel and Lamme Goedzak Pérez-Reverte shows it from the other side of the harquebus, as told by the Vascon 'mochilero' Íñigo Balboa. Some quotes: "Howling with all my might, yelling my despair, my rage, and the courage of the race of men and women who made me." "He who kills from afar tests neither his arm nor his conscience, nor does he create ghosts or: know what he has lost." "I wondered how many women, how many wounds and how many deaths a man must know, for these words to remain unspoken?"

I loved the writing in this one, especially because it is a very dirty and gritty description of war, from the point of view of the Spaniards, during their battles in Breda and Antwerp.

I'm giving this 3-stars because it "goes nowhere", stuck in this historical event, despite lots of action and swordplay, but with no real dramatic climax or denouement.

Most of the historical books I've read so far have been written by French and English authors, and generally have a negative portrait of the Spanish adversaries. The book can be read as a standalone, there are some slight references to previous events, but the plot is self contained and it closes with a reference to Velazquez masterpiece : "The Surrender of Breda" (I don't know how to insert pictures in my review, so go check on wikipedia) and with a comment on the fickle nature of history that preserves for posterity the image of generals politely congratulating each other and hides somewhere in the background the grunts that actually had to shed their blood for the celebrated victory.

That was in 1994, but his debut as a fiction writer started in 1983, with 'El húsar', a historical novella inspired in the Napoleonic era. After this book, he could leave definitely journalism for focusing on his career as a fiction writer.