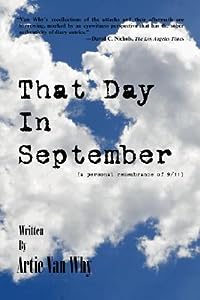 That Day in September

by Artie Van Why

From the moment he heard "a loud boom" in his office across from the World Trade Center, to stepping out onto the street, Artie vividly transports the reader back to the day that changed our lives and our country forever.

"That Day In September" takes you beyond the events of that morning.

The reader comes away from "That Day In September" with not only a more intimate understanding of the events of that day but also with a personal glimpse of how one person's life was dramatically changed forever.

What People Think about "That Day in September"

I'm glad to see that the outcome was positive and I think this book will continue to inspire new readers as years go by, not just for the events featured but also because it's a deeply powerful story on resilience and life.

I saw many people lose their lives that morning. I also changed My Review to My Thoughts as my mind couldnt wrap itself around the word review after reading this book. I wasnt in New York that fateful day, but I do have family that live just outside the city. My daughter and son-in-law now live in New York City. Now, having visited New York, and being familiar with where the towers once stood, I was able to visualize Arties thoughts and actions that morning much more vividly. I have been to Battery Park and I have stood before the sphere, myself whole, but dented and damaged from life, not at all unlike Artie.

Artie Van Why worked right across from the twin towers on that fateful day in 2001. Artie Van Why now lives in Lancaster, Pennsylvania, and works at a small theater. He found that writing about his experiences--and speaking about them live in a play--helped him process his profound, painful feelings and memories.

I found That Day in September deeply personal and moving. The words in this short piece could have only come from someone who was there. Artie Van Why stated many reasons for writing about his experiences. Its up to us to choose how to live. Id love to see Mr. Van Why write a fiction piece based on his experiences during this time of his life.

The first few chapters alternate between pieces of that day, interspersed with flashbacks of his complete New York City experience in the years before the tragedy. But what I loved most about this short but moving story is Van Why's personal realization that every day is precious; if there can be a silver lining for him, this tragedy gave him the courage to move away from "just a job" and follow his heart.

Of course, THAT day was awful enough to witness from here, thousands of miles away, but to imagine the noise, the fright, the mess itself for real must have been just appalling. As I mention, it's a short memoir but worth a read.

Title: That Day In September Author: Artie Van Why ISBN: 978-1411683150 Publisher: Lulu Everyone pictures the falling to of the Twin Towers, the images and the destruction in their own mind. Its like a painting filled with uneven shapes, dark colors, figures falling, flames soaring and smoke enveloping the sky, the sky and the world. Take a trip back in time to that day in September when America felt the shock, aftershock and horrors that changes the lives of every New Yorker, American and visitor that saw what no one wanted to believe, the crumbling of the Twin Towers. There have been many books, articles and movies that have recounted these events but none so compelling, accurately described and heart wrenching as that That Day In September, by Artie Van Why, as he brings the reader up close and center stage as the lead actor in a play that he never wanted to star in. He envelops the reader in his real life experience that memorable day. Flashing forward Artie walks through the revolving doors of his office building into a world covered in paper, soot, falling bodies, smoke so thick you could taste it, ash so black you could use it as charcoal in a painting, and dust so filled with debris it made breathing difficult. Describing his day, the trade center, the buildings, concerts help make the city come alive for the author, reader and visitor. People falling to the ground, others running blindly in the street, some standing in one place as if in a trance or daze, like a horror movie that you watch over and over again except its real and you cannot remind or delete the tape. He takes his own special leap into life and decides to live it one day at a time and redefine who he is.