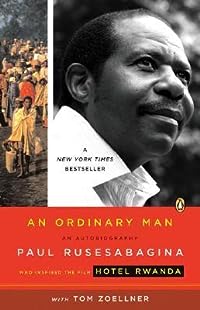 An Ordinary Man: An Autobiography

Confronting killers with a combination of diplomacy, flattery, and deception, he offered shelter to more than twelve thousand members of the Tutsi clan and Hutu moderates, while homicidal mobs raged outside with machetes.An Ordinary Man explores what the Academy Award-nominated film Hotel Rwanda could not: the inner life of the man who became one of the most prominent public faces of that terrible conflict.

What People Think about "An Ordinary Man: An Autobiography"

While Rusesabagina saved many lives, nobody really knows what happened in the Milles Collines and it is possible he cannot be taken at his word.

But I hadn't known that Paul Rusesabagina had written a book until very recently when I happened to stumble on it here on Goodreads. So, with that being said, when I saw that Rusesabagina had written his story down, I needed to read it. I had been moved, and awakened, by the movie, and I was thrilled that there was an autobiography that would allow me to learn more about the man himself, and the country that had caused so much devastation for itself and its people. Rusesabagina simply told his and his country's story as he understood it. Rusesabagina simply and honestly introduced us to his Rwanda, the Rwanda he grew up in and loved and would always love, and also the sinister Rwanda lurking just under the surface, which would rise in 1994 to kill 800,000 people in a little over 3 months. I don't know how true his story is, but there is a bibliography at the end with other books on the subject, which has given me a place to start, if I decide to read more, specifically "Leave None To Tell The Story: Genocide in Rwanda" by Alison Des Forges and "We Wish To Inform You That Tomorrow We Will Be Killed With Our Families: Stories From Rwanda" by Philip Gourevitch. I just know that Rusesabagina's is a heroic and brave story that inspires me.

An Ordinary Man: An Autobiography, though, isn't a book about the Rwandan massacre; it's a book about Paul Rusesabagina's experience of it. I won't go into the details of how Rusesabagina managed to do what he did - if you want to know, read the book.

Rusesabagina saved over a twelve hundred people from death during the short massacre in Rwanda in 1994. Simply put, it was white conquerers, particularly Belgian, who set the hutus against the tutsis by defining the different groups prejudicially: the tutsis were the refined, intelligent leaders, while the hutus were only suitable for slave labor, essentially. Paul had a Tutsi mother and a Hutu father. Yet one of his close friends from childhood, with a Tutsi father and Hutu mother, was defined as Tutsi and was forced to leave school. Paul placed the blame for the genocide primarily at the feet of this station, which, it turns out, actually was government-run after all. But back to Paul and how he was able to be effective in his role as hotel manager.

The book provides an extremely harsh view of the world's failure, and particularly the failure of the United States and the United Nations, to intervene in the early days of the genocide to prevent the killing of hundreds of thousands of innocent people.

The book's title is a wry understatement: it is an autobiography of Paul Rusesabagina, the hotel manager whose courage, resourcefulness, shrewd tact and personal presence saved more than 1000 lives when a spasm of genocide swept Rwanda in 1994. If you have not seen the film, read the book first, then go watch it. A lesson about genocide, about a willful attempt by one social group to exterminate another, and if the one of Rwanda may not have been the largest one, the authors here show (and Tom Zoellner shares full credit) that it stood out from the rest in ferocity, intensity and cruelty. Rwanda and its sister-state Burundi are two small states on the spine of Africa, enormously fertile and densely populated by two ethnic groups, the Hutus and the Tutsis. There was nothing unusual in Rusesabagina, a Hutu, taking a Tutsi wife. What sustained and strengthened the division were the Belgian colonial rulers, whose identity cards demanded the bearer to be ethnically defined as Hutu or Tutsi. All this is described in a measured, matter-of-fact language by Rusesabagina, in the tone of a citizen used to peace and order, yet forced by circumstances to face raw evil. But it would not have happened without the author's strong moral character, and the book also tells (what the movie does not) how that character was molded by a strict but kind family, especially by a mentoring and encouraging father. People who may seem purely evil, he tells us, often have hard and soft sides to their personality--for instance, that police chief siding with the murderers may not be completely at peace with what he is doing. The film ends when all the hotel's occupants escape to the Tutsi rebels, but the book goes on, and the story is not all sunny. Rusesabagina's nightmare seems over: new identity papers omit any ethnic identification, and once again he manages a high class hotel. True peace continues to elude Rwanda, whose new government again seems to enter a path of cronyism and corruption, evils which preceded the genocide.

This is the memoir of Paul Ruseabagina, a hotel manager in Rwanda during the 1994 genocide. right through every human heart." Ruseabagina calls this memoir "an ordinary man" and in the introduction insists he's no hero. Along the way the book examines the nature of genocide and what caused it to break out in Rwanda, what different infamous 20th century genocides share, and what could have prevented it. And actually maybe that's part of why Ruseabagina called this book An Ordinary Man--because he wants to emphasize what he did was nothing extraordinary, nothing beyond the reach of an ordinary person--in other words, no we do not get off the hook.