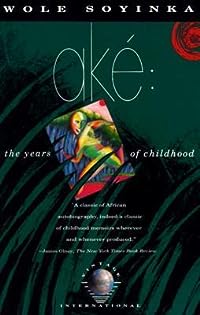 Aké: The Years of Childhood

"Aké: The Years of Childhood" gives us the story of Soyinka's boyhood before and during World War II in a Yoruba village in western Nigeria called Aké.

What People Think about "Aké: The Years of Childhood"

The pedagogical value of forbidding shoes in a school remains a mystery, both to the young boy about to change schools yet again on the very last page of this account, and to the reader, who also has to bid farewell to the magic of this very special childhood with a father called Essay (S.A.

Each and every sentence is more of a beam than a part, interchange of far reaching wave and concentrating of particle as Soyinka conjures up his childhood in as delightfully subsuming a manner as the best fiction often does. If a child is telling you a story, wouldn't you say that it's best they be both precocious and all too young, offering up tales of strange exploits combined with the most precious of thoughts? Always stubborn, always questioning, always following his interests both physical and intellectual, viewing the admonishment of various adults as guidelines he is fully free to evaluate and critique in as vocal a manner as is necessary. However, the young Wole's view is always a mix of engagement and critique, accepting what makes sense to him and puzzling over the nonsensical with the aid of knowledgeable adults.

#2 I love thee for thine courage. 1982 and thou dared come forth as a work of nonfiction, during a time when your African peers would have scorned your genre, told thee that thou art a bit full of it, that only true stories of kings, queens, or presidents (if even that) are befitting to be set to books. #6 I love thine bookish young narrator. #7 I love how after reading thee, I felt the same way I did after reading, Houseboy.

I mean his questions were of genuine curiosity, this was a child thirsting to understand the world, make sense of it, and make use of it way before most children would be forming proper sentences. I also loved the cultural richness and the way I was exposed to it all. The simplicity of complex issues like someone who was a Muslim but converted to Christianity, or the fact that everyone was afraid of juju even though no one knew what else to make of it, or the desire to abolish taxation in the face of corruption I come across so much in this novel through the eyes of young Wole which remained innocent and judgment-free, as they should. But you are not old enough, Wole. Anyway, I have come to school.

Of course, we soon learn that he was not an ordinary boy: extraordinarily perceptive, curious, and wise beyond his years, Soyinkas narrator melts into the collective I of Ake so completely that at times I forgot he was theremuch the same way that, throughout the book and especially in the final chapters, his child self is perpetually observing scenes from rooftops, or through closed doors, and reporting back to the reader what he learned with an objective sense of omniscience.

After reading it, however, I can't help but wonder how Mr. Soyinka could possibly remember all that happened to him as a child in such vivid detail.

In a slightly unusual but very well-crafted narrative, he tells the whole story from the perspective of himself as a child (I'm somewhat reminded of Roth's The Plot Against America) which means that as he grows up, the story becomes more intricate, the adult characters more three-dimensional, and his observations more astute; mirroring, in a way, a young country starting to find its footing (Nigeria wouldn't achieve independence until 1960).

In this memoir, he tells of his childhood growing up in the town of Aké, up through his eleventh birthday. Soyinka, however, has had his childhood etched on his brain. We find that Wole was a bookish young boy, sneaking off early to school at age four to be with his older sister, and taking some of his fathers books with him.

Soyinkas foundation for politics may have been laid by his father, but it is his mothers feminist activities that seize him.

i found myself daydreaming while i read -- there was no connection to the story or its characters.