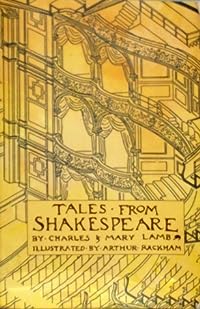 Presents an introduction to Shakespeare's greatest plays including Hamlet Othello, As You Like It, The Taming of the Shrew, The Tempest and Pericles.

What People Think about "Tales from Shakespeare"

While certainly keeping the magic alive by use of Shakespeare's original words but also not letting go of convenience at any point, the language is very easy, but still perfect for Shakespeare. It's such a powerful rendition of Shakespeare's plays in a very accessible format, interesting and easy to read for adults and children alike. My edition had The Tempest, A Midsummer Night's Dream, Much Ado About Nothing, As You Like It, The Merchant of Venice, Macbeth and Twelfth Night with refresher questions about each play at the end. So, reading The Tempest I nod off and I see the demons somewhat like in the book in my sleep which conveniently make me wake up in fright. At the start of the year, I read A Shakespeare Treasury, a list of favorite quotes from Shakespeare's works which was quite nice. The whole huge book, it's a big responsibility, not to mention the feeling/weight of being done with all of Shakespeare's works. Lamb's Tales is another one of my attempts to pave my way into the world of Shakespear. It was pretty, funny at times, well executed except the part about "making" the guy fall in love. Much Ado About Nothing : Cousins, Lords and a Prince. Lord falls for the nice cousin, Prince helps. Short-tempered cousin and Lord bicker all the time. As You Like it : Cousins (what is it with Shakespeare and cousins?), Duke (has nicer, prettier daughter, gets exiled by brother, lives in forest like Robin Hood), false Duke (kinda evil, of course), daughter falls for father's friends's son who her uncle dislikes, follows father, cousin comes along, daughter dresses up as a boy, befriends beloved who also has come to the forest and has been taken under the wing of the Duke.

Its a good sampling of Shakespeares comedies and tragedies, but I cant help wondering why they omitted his histories? Goodness gracious if children can deal with Hamlet and Macbeth, they can deal with the former and even absorb somewell according to Shakespeare anywayhistory as well.

The plays are written as "short-stories" which made the book even easier to comprehend.

Tales from Shakespeare by Charles and Mary Lamb is a 1001 Children's Book. Here is a sample paragraph, taken from a chapter about a play I not only haven't read, but that I hadn't even heard of before I read this book, Timon of Athens: "Now was Timon as much avoided in his poverty as he had been courted and resorted to in his riches.

Even though the blurb said that it is "prose retellings of Shakespeare's plays", I was besotted with doubts because reading summaries of Shakespearean plays is the last thing on my mind right now.

Anyway, this is a great little book, especially for those of us who happen to have young children (not that I'm one of those people), simply because it has been written in a style that is really accessible to those of us who might not be able to understand the language, or even be able to follow what is in effect a script. It is interesting to consider the target audience of this book though written in 1809 it would have mainly been for the children of the middle and upper classes, who no doubt would have been able to read. In a way we can trace the modern children's story back to the work of Charles and Mary Lamb, who saw a need to make some of the classic Shakespearian plays more accessible to the younger audience.