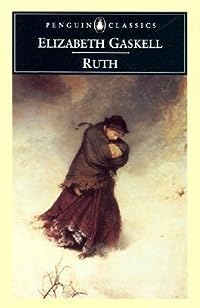 In Ruth Elizabeth Gaskell set out to portray, not 'the Condition of England' already famously addressed in Mary Barton, but the nature and sensibility of a fallen woman.

Her orphaned heroine Ruth, apprenticed to a dressmaker, is seduced and then abandoned by wealthy young Henry Bellingham.

When Ruth, Elizabeth Gaskell's second novel, appeared in 1853 its first reviewers were scandalized than moved and intrigued.

What People Think about "Ruth"

(Or maybe one reason I don't like Ruth as a character, though, is because of her masochistic insistence on beating herself up over one mistake, a trait that is uncomfortably familiar to me.) Of course, her real fault is that she is a "fallen woman," which is exactly why Gaskell made her so unrealistically good and pure -- she had to make Ruth perfect in order to show that she was unfairly punished for one mistake she made in her youth. I understand this, but it makes it hard for me, as a modern reader, to be interested in her as a character. (Well, and Hetty is, to me, a more interesting character because of her flaws -- and especially her crime.) Another interesting thing is to see the various jobs Ruth has in her life; she is a seamstress, a governess, and a nurse.

Sally the housekeeper kept the humor and a few tears in the book for me but Ruth's character was unmistakable of pure love for all mankind even at her death and her forgiving heart to nurse back the likes of the scoundrel Mr. Donne and his stupidity and lack of propriety and respect to the opposite sex and towards his own son which I was so glad stayed with the Bensons who could give him the care and education that he deserved whether he be a child born out of wedlock or not.

Mary Barton of Gaskell's first novel made some poor choices and Ruth here seems to have been a bit naive as well. Reading other reviews here on Goodreads, more than a few didnt like our little Ruth either but for different reasons. So I guess I dont see/expect the character of Ruth as needing to be fully developed for the purpose of this novel.

Perhaps this is because I was expecting something similar to North and South Read more on http://www.thebooksatchel.com/ruth-el...

Gaskell seemed to go to the extreme with Ruth: tragedy, poverty, isolation and no fight. On the other hand, I thought Mr. Benson's character was incredibly interesting. Gaskell did a nice job in showing us the depth of his character and his struggles between his religious beliefs and Ruth's past.

This is, at times, a very sad book but Ruth is also treated with great kindness by some, and she is such a graceful and dignified character, that it is also quite uplifting at times. The narration was very good, but be aware that the "chapters" in the audiobook are not the actual chapters of the book which can be confusing!

This book evoked many emotions in me -- I laughed, I cried, I disliked certain characters, and loved others. My favorite quote from Mr. Benson: "I take my stand with Christ against the world." I loved the language of the book -- Jane Austen-ish.

Sylvia's Lovers, which I read last year, I thought genuinely one of the great Victorian novels. The character I found most distinctive, however, was that of the brave and thoughtful dissenting minister Thurston Benson, the first figure in the novel with the intellectual boldness and religious empathy to hold out a hand to the outcast Ruth. She is struck by his gentle, pensive manner, and his very singular, quite beautiful face, although Bellingham scornfully dismisses her little hunchback as not a gentleman on account of his seedy lodgings and clothes (he must be a traveller or artist, or something of that kind.) Benson is used later in the novel to embody a model of free-thinking, radical Christian morality, capable of challenging the smug bigotry and unthinking cruelty of conventional mores. Although this is never spelled out in the novel, Gaskell clearly suggests that Bensons Christ-like sensibility may be rooted in his experience of physical disability, which gives him an unusual degree of empathy for the weak and the ostracized. By sheer serendipity, I have found myself reading two Victorian novels over the past few months that include a disabled man of notable facial beauty as one of their main characters: this and Wilkie Collinss The Law and the Lady, published some two decades later, in 1875.