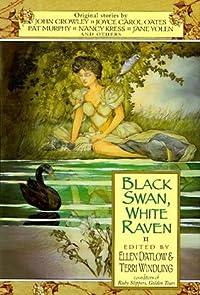 In their fourth collection of original adult fairy tales written by some of the premier names in literature today, World Fantasy Award-winning editors Ellen Datlow and Terri Windling transport readers deep into an enchanted forest with a stunning array of magical stories - bringing us the princes and ogres, charms and bewitchings, castles, cottages and secret gardens of fervent imagination.

Snow in Dirt Michael Blumlein A very odd, science-fiction style story of a man who finds a beautiful woman buried, alive but seemingly comatose, in his backyard...Once she is resuscitated, he of course marries her, and she goes on to a career as a famous fashion model... but as usual, not everything works out perfectly when mysterious and possibly magical elements are involved... Reminded me a little of Melanie Tem's story in the other volume of this series that I just read. The Little Match Girl Steve Rasnic Tem A short poem based on the story. The Trial of Hansel and Gretel Garry Kilworth In this medieval-esque courtroom drama, the actions of the two children who pushed an old woman into her own oven take on a more criminal aspect. Rapunzel Anne Bishop In this fairly-traditional retelling of the Rapunzel story, the eponymous character's mother is shown to be a horrible, self-centered bitch and the witch who steals her is no better a bitter, malevolent old woman. The Reverend's Wife Midori Snyder A very cute and funny story set in Puritan(?) times about two women who concoct a couple of quite absurd stories in order to each have an affair with the other's husband but, oddly enough, both end up happier for their adulteries in the long run. Lost and Abandoned John Crowley The counterpart to Joyce Carol Oates' story - a father fights tooth and nail to gain custody of his children, even though he is neither financially nor emotionally equipped to care for them. On Lickerish Hill Susanna Clarke Clarke's period' spelling is in even heavier effect in this story than it is in Jonathan Norrell.' Personally, I really find it irritating, even if it is historically correct for her Victorian-esque setting. Still, if one can get past the creative' spelling, this is a clever, funny and very entertaining version of Rumplestiltskin.' The team of learned experts' is hilarious, and the portrayal of the seemingly helpless Victorian lady as calm and resourceful in the face of adversity (including being locked away and threatened) is quite subtly subversive.

Clearly these people have never looked at the 'original' stories -- 'negative and creepy' is one person's assessment, so goodness knows what they'd think of earlier versions of Sleeping Beauty and so on.

Other than a handful of really well known classics, Im not generally familiar with the source material, leaving at least one level of a retelling inaccessible for my appreciation. After reading this Ive since picked up all the other volumes from the series during an Open Road Media sale and look forward to enjoying them all. Nonetheless Im glad they are there because I think the art form would give great opportunities for briefly retelling the cores of fairy tales. And these fairy tales, already existing classically in myriad form, really are about some general core elements rather than any given specific details of the plot.

I've always been fascinated with fairy tales, and this series puts a whole new spin on well loved stories.

Whats not to like about fairy tales? And whats not to like about a modern-day re-telling of them, especially if theyre written with an adult audience in mind? Yes, it helps to have a name like that of Joyce Carol Oates on the cover. But it remains difficult with a collection like this oneat least for meto cite any one story (or even a few stories) as outstanding.

(view spoiler)The Flounder's Kiss - be careful if your husband is a fisherman.

So picked up this anthology touted as adult retellings of fairytales and yes I should have known better as I read other books by this author before but I tried it again, I probably won't again anytime soon LOL so I decided to try something new when I read short stories and that is typing my reviews as I read them which led me to my two star ratings but I attempted each one and here are my thoughts..sigh on to more reading :) ---Flounders Kiss-Story about a fisherman and his unhappy wife who wishes he would stop fishing and make more money until the day he reels in a talking fish..Not a favorite. ---Rapunzel-Okay so it started with so much promise I can actually say I read with intrigue, then the story broke into weird confusing parts with shifting narrators and again I have to say I did not enjoy..Disappointed. ---Sparks-I dont know this book is just losing me and losing me, I cant get into these stories and when I do I just want to stop reading them..Not even really sure what this one was about but I didnt like it, sigh almost halfway through a severely disappointing readdammit. ----Lost and Abandoned-Eh, not so much, basically the backstory to Hansel and Gretel though in the most vague way possible starting with the destruction of a marriage and the mother leaving the father with kids he eventually abandons too and then this like educational research component on the psyche of kids left behind or something like that, yea I got confused..and I didnt enjoy it, disappointed again. ----The Breadcrumb Trail-A poem, not my favorite literary piece about Hansel and Gretel and their trek into the woods and the rationality and desperation behind leaving the crumbs to mark their trail..Not the best, not a favorite, not really disappointed but eh just flat kinda bored ---.On Lickerish Hill-Yea, tried it but there is just this weird language technique she tried that frustrated and confused me, the misspellings the old English yibberish and just the uninteresting story lost me somewhere, Disappointed *seriously they spelled poor as pore I was just done, better reading has to be ahead.

Ellen Datlow has been an award-winning editor of short science fiction, fantasy, and horror for over twentyfive years.