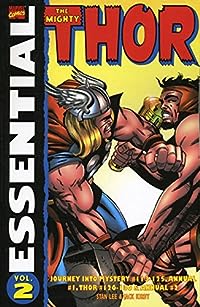 Witness classic cosmic clashes between the God of Thunder and his evil stepbrother Loki, the Absorbing Man, the Destroyer, and more of his most fearsome foes!

Plus: Thor's first journey into the Black Galaxy and a reporter's firsthand account of Asgard!

Essential Thor Volume 2 opens with a magnificent battle scene in which Odin, Thor and a bunch of other Asgardians fight the demon men of Jutenheim. Happily, the theme is tied up at the end of this volume in Mighty Thor # 136, To Become an Immortal. After failing to become an immortal, Jane Foster is taken away forever and Thor is morose for about three pages, until he meets Sif, a curvy goddess who can fight. Sobs can be induced by comparing Collettas inks to the magnificent job Frank Giacoia did on Journey Into Mystery #115, The Vengeance Of The Thunder God. Chic Stone went on to other things at this point and, for a brief, wondrous spell, Giacoia inked a couple of issues of Mighty Thor, Captain America and The Fantastic Four. Loki turns convict Crusher Creel into the Absorbing Man and kidnaps Jane Foster, taking her to Asgard. When Thor comes to rescue her, the lying Loki tells Odin that Thor bought a mortal to Asgard which is strictly not allowed. Thor is allowed to seek them out and prove Lokis treachery but the evil one activates the Destroyer to stop him. The Absorbing Man returns and helps Loki take over Asgard! As an added bonus there is Tales Of Asgard a five page back-up strip that started off featuring the adventures of young Thor and moved on to grander epic stories. They started off showing how young Thor earned his hammer, the mighty Mjolnir, while Loki schemed to stop him. This volume takes us from Journey Into Mystery # 113 (February 1965) through to Mighty Thor # 136 (January 1967) and is among the best stuff issued in the Silver Age of Comics.

And I LOVE Stan and Jack, so those two combined on a character with some extra-superheroic appeal is comic book gold for me! Stan's pounding, purple panoramic prose and awe-inspiring, assiduous alliteration fit the exaggerating, ornate world of Asgard (as well as possible, at any rate), and Kirby just fills every page with HUGE tapestries of godly design, deitic action sequences, and scenes of surprising emotional resonance. Okay, Jane Foster was a little dull (small wonder that Thor seems to instantly forget where after he meets Sif in the final chapter!) and the outer space battle with Ego, the Living Planet, seemed like an odd fit for a magic-based, "old-world" character like Thor, but the majority of the stories - the introduction of Hercules, the Destroyer, Loki's plots, Pluto's scheme to damn Hercules to the underworld, the High Evolutionary and the Absorbing Man - were all terrific, fun, DENSE stories!

Issue 131-135 is my favorite part of the book as Lee and Kirby take Thor into space to fight epic space monsters. In addition to the main Thor plot, each issue features a Tale of Asgard. This is true in the main Thor titles and also in the Tales of Asgard shorts which Marvelizes a lot of Asgardian legends, most of them center around younger versions of Thor and Loki, playing to the popularity of Loki as a villain (although there is one explaining the "true" version of Little Red Riding Hood.) The stories are often serialized giving them a kind of old style Prince Valiant feel to them. Overall, this book is very good as Lee and Kirby turn Thor into a truly epic and memorable character.

lol Thor/Jane and Thor/Sif spoilers ahead. (view spoiler)So the last comic in this set marked the end of Jane Foster in the set. LOL ROMEO, I MEAN THOR, I'M GLAD YOU CAN SO EASILY FORGET THE LOVE OF YOUR LIFE ROSALINE I MEAN JANE THE SECOND YOU CLAP YOUR EYES ON JULIET I MEAN SIF.

It is Jack Kirby throughout and he has come into his own as an artist. As much as I wanted to see her go, I felt the way they wrote her off was too backhanded, and Thor's shifting his affections to Sif far too quick considering all of his annoying pining. Oh well, I wanted it to come, I guess I shouldn't complain.