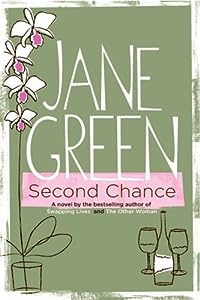 In her latest book, Green tells the story of a group of people who havent seen each other since they were best friends at school.

Warm, witty, and as wise as ever, this is a story of friendship, of family, and of life coming full circle.

What People Think about "Second Chance"

So we have Holly, trapped in an unhappy marriage to Marcus, a vain, snobbish, selfish lawyer. The author devotes many pages throughout the book to demonstrating how vain, snobbish and selfish Marcus is. This collection of cliches (sorry, I mean characters) falls in and out of bed with each other and others, goes to weddings and funerals, gets pregnant, gets drunk, gets depressed, gets high, gets low ... I would rather give five stars to all the books I read because I know how hard it is to write a book, how much effort and heartache and emotional investment goes into it. But really, don't people write books with real characters and real plots any more?

I'm not sure what happened to Jane Green's writing craft in this book; the POV jumps wildly in and out of various character's heads, sometimes in the same sentence.

***If you love the book, do not read this review. Nothing is likable in this book. She had been pondering about what her life could have been if she picked her best friend Tom over Marcus. And She actually grieves, not because Tom was her best friend, but because Tom was the life she was not able to have. After years of being married, she admits to herself that Tom is her one true love and not Marcus. In fact the two things that will make you like this book is, a.) if you're 40 years old and unhappily married, going through some midlife crisis. b.) your life is so boring, even a book as nonsense as this would thrill you.

That, coupled with the tense shifts just drove me crazy.

While I enjoy Jane Green's novels, usually, they are simply chick lit--something to pass the time while by the pool, on the beach, on a plane, or just at home on a rainy afternoon. I think this is the first and only time that Jane Green's writing addresses real issues that women (and men) go through.

Second Chance's by Jane Green is a book I have been meaning to read for some time and finally got around to doing so. I loved this book, not only because of the way Jane Green narrates and develops her characters but also because this novel holds real meaning for me.

I so rarely read books about ordinary people doing ordinary things, so it always gets to me when I realize that I actually enjoyed it very much. Still though, I did actually enjoy the story and while I am quite a bit younger than the characters in the book, I feel like it's an honest description of possible life scenarios.

Grief has to be filed away, compartmentalized, allowed out only when the rest of your life is sufficiently organized when you can have time to yourself to give in to the pain." Experiencing losing a friend this week, I thought, I don't have time for this feeling right now, I don't have the energy to feel this. And on divorce: "For this, she realizes, is why you lose friends when you get a divorce.

If you enjoy listening to someone whine continually about her husband (a man she choose to marry knowing how she felt about him) then this is the book for you. In reading other reviews this book is referred to as 'chick lit' and is a good one.

Will she stay married for the kids sake, or will she get a divorce so she can try to be happy herself.

Jane Green's eighteenth novel, Falling, is soon to be released with Berkley/Penguin; she is the author of sixteen previous New York Times Bestselling novels, and known as one of the world's leading authors in women's fiction, with over ten million books in print, and translations in over 25 languages. A graduate of the French Culinary Institute in New York, Green is bringing out her first cookbook: Good Taste , with Berkley in October 2016.