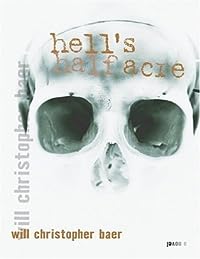 by Will Christopher Baer

Kidnapping, snuff films, amputee geeks and a requiem of lost love.Cast adrift after the blood symphony of Penny Dreadful, Phineas Poe is looking for answers in the form of a woman.

He tracks Jude to San Francisco, where he finds her involved with John Ransom Miller, a wealthy sociopath with a mysterious hold over her.

What People Think about "Hell's Half Acre"

His writing was a slice of old detective journals, mixed with a raunchy red-light district air of gutter-smug that makes the reader treat the book like a car accident, the kind that only get worse as you pass by. As Kiss me Judas winds to a stuttering halt, with Poe and Jude at odds, Baer keeps the dilapidated train chugging along, whacked-out on speed and switching nerves whenever the mood pleases him. Baer launches the reader into another tail spin with his sequel to Kiss me, Judas: Penny Dreadful. The second book washed over me like a blood-soaked tidal wave, its random body parts poking and prodding my brain, looking for a hiding place to set down some lines, and eventually have its way with my psyche. Will Christopher Baer, Penny Dreadful Now on to the end, the proverbial last stand we the reader's have with our friend Phineas Poe. First, let me share that Baer's last book (this one) Hell's Half Acre was a bitch to obtain. This book opens much like the others, Phineas is lost and without Jude, he has an idea where she might be, but of course, he has no resources and little energy to find out exactly where that is. It feels like Baer breaks minor boundaries in his writing, and how he tells his story, he doesn't care about rules and just "goes for the gold", so to speak. These stories almost feel like he only wanted to write for himself, and by chance they happened to get some sort of attention, so he let them go down the same dark paths that Poe have gone down; the road of uncertainty; the highways of disillusion. I finished this book an hour ago, and I am so pleased with the way it ended. I won't make any promises that you will love these books as much as I did (i have odd 'likes'), but I will say this: Anything you can imagine is probably true.

Don't get me wrong, it's not that I had any problems following along Baer's twisted neo-noir fantasy - I just didn't enjoy it as much this time around. Poe's main antagonist this time, aside from Jude's twisted psyche, is John Ransom Miller, a wealthy lawyer. The only thing that Miller wants in return is her participation (and a few others) in the creation of a snuff film. Molly was one of the actresses hired for the snuff film, which may or may not be Miller's present girlfriend. The scenes in which she connects with Poe were well done and had me rooting for the two to get together - however, I think it's more so because Jude enraged me 99% of the time.

The Phineas Poe trilogyKiss Me, Judas; Penny Dreadful; and Hells Half Acreis narrated by the disgraced ex-cop turned ex-junkie of the same name. Where Kiss Me, Judas and Hells Half Acre are four star and 3.5 star reads respectively, Penny Dreadful is a two star shoulder shrug of what it should have beena mild side note to a much longer novel or a different novel that didnt involve Phineas Poe. The events that take place in Penny Dreadful seem more set apart, disconnected from the bookend novels. The minor Kiss Me, Judas characters could have been involved, made it a fun side-by-side comparison of the universe Will Christopher Baer has created, but the force of the love/hate relationship between Jude and Phineas Poe is diluted by what should have been a small plotline. Despite the flaws of Penny Dreadful and what can be viewed as too many loose ends come the end of Hells Half Acre, Baer has crafted a sleek, quick-read trilogy for fans of the darker side of fiction.

Just how I like it. I don't like poems but I enjoy poetic writing. In this book, Jude is vulnerable and unstable, which is unusual for her.

I genuinely wish I could have my memory erased in some kind of 'Eternal Sunshine of The Spotless Mind' procedure so I could read this trilogy all over from scratch.

I do feel as if this was the second book in the series, and the Penny Dreadful book was kind of out in left field.

I liked Baer's writing because it was dark, and sounded cool, and maybe I didn't understand all of it, but I still loved it. It had sex and violence unlike the books at school, and my English teacher didn't care if I read unassigned books in class; I was failing anyway. You can pick it up and read a few sentences and maybe you'll read the whole book over the next day. But I just read it again for the second time, and it was damn good. Reading Hells Half Acre now, 14 years later, I can see a lot more through Poe than I ever did as a teenager. I can relate in some ways that I probably never wanted to relate to Poe. But then there's other ways that I wasn't expecting -- the way he latches to the child. I never noticed how damn vulnerable Poe is in this one, and it hit me hard. Maybe I was just too young to see that Poe's this sad, broken guy that really wants to go fuck off somewhere with Jude and live happily ever after and all this other stuff is just happening around him. It's weird reading Baer's work now because of the radio silence he's been broadcasting for, what, 13 years? I don't know what happened to Baer, why he disappeared. I remember reading someone say that he probably wrote the poe trilogy when he was in a very dark place and he's moved on, and doesn't want to be reminded of these books. Maybe he's writing the book again and again and again until it's perfect. I'm sure the most logical answer is true -- the man wrote a few novels that got mildly famous, and as poe says, he never wanted to be famous. Okay, maybe not like that, because that's like, actually life changing. Jude shows small vulnerable moments of motherhood throughout the book, and I don't know if they'll actually be a good family, but I can see it. Around the first time I read him, I got in trouble handing out copies of Kiss me Judas at school. If the rest of my life resembles the last 15 years of it, i'll be googling Baer's name damn near monthly, hoping to see something come up.

As a child, he lived in Montreal and Italy. However, he received a B.A. at Memphis State.