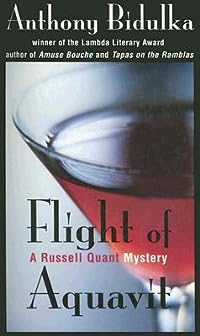 Gay private detective Russell Quant is faced with personal threats he can't ignore, a friend who may be a foe, and a cagey client with a treacherous monkey on his back.

Lured to New York City, Quant tests his wit, wisdom, and wiles from the Old World grandeur of Fifth Avenue to the kaleidoscope world of Broadway's electric night-spots.

Threat turns into deadly reality and the need to uncover the identity of Loverboy becomes increasingly desperate.

Quant deftly manoeuvres through the twists and turns of a perilous case and a personal life rife with its own mystique and mayhem.

What People Think about "Flight of Aquavit"

Rating: 3.25* of five The Book Report: Saskatoon's only gay PI, Russell Quant, is hired by a mysterious client to discover and neutralize (this is Canada, folks, it doesn't mean "kill" to them) a blakcmailer known only as "Loverboy," who is making life a living nightmare for several people with secrets. But in the end, I really enjoy visiting Saskatoon, and I quite like the sense of joining Russell's life that Bidulka manages to convey. Particularly fun is Russell's heavily accented mother..."sonsyou" (basically "sonny boy") is the only thing she calls him...and the obvious thought is that Ukrainian gay boy Bidulka is drawing on life experience here.

On the personal front, Russell ask his mother to spend the Christmas holiday with him .It's an invitation that he doesn't expect his mother to accept since she either to go to his brother or sister homes.

Like in the first book, I kept waiting for a love interest to enter Russell's life, but my hopes were quenched.

The plot is not overly complicated but it's not one of those cases where you know who the guilty party is well before the end of the book. He's a very relatable guy you'd trust as a friend. Bidulka is also that rare writer that maintains a sense of pacing in his books. Flight of the Aquavit is a wonderful book I really enjoyed.

I want to see Russell's friend Kelly get her enjoyment of life back, I want to hear about Sereena's mysterious past, and I want Russell to get intimate with somebody -- the opportunity for sex slips away from him several times in this book. As he tells his mother, "I have a life I love and I'm not looking to change it." Where Bidulka's writing really shines is in the presentation of all the people that Russell interviews in the course of his investigation. In general, I noticed a sort of battle between some stereotypes and some vivid portrayals of characters and interactions, and the former were almost always in the service of "comedy" -- oddly enough, I think Bidulka would do better if he stopped trying to be funny. Another downside of the novel is that the author telegraphs the plot developments and the identity of the villains in a way that makes Russell seem really slow on the uptake for not spotting them.

It has just about everything you can ask for in an entertaining and humourous book - great and unique characters, a decent, if not awesome plot, some action, lots of detection and a couple of pretty good twists that, while not obvious, didn't come right out of left field and may have been seen coming earlier.

Russell Quant is back in a action pack plot involving blackmail, a trip to New York right before Christmas and his mom staying with him out of the blue.

The writer's descriptions of Mid Town New York City at Christmas time were quite on target and most enjoyable to read.

Flight of Aquavit is a mystery novel, whether you are gay or not, should be on your to-read list.

In 2003, Quill & Quire described Bidulkas first book, Amuse Bouche: A Russell Quant Mystery, as an effervescent first novel that is much like the tasty French hors doeuvres from which it takes its name, earning Bidulka a nomination for the Crime Writers of Canada Arthur Ellis Award. Anthony's Books: Set Free (2016) The Adam Saint books: When The Saints Go Marching In (2013) The Women of Skawa Island (2014) The Russell Quant books: Amuse Bouche (2003) Flight of Aquavit (2004) Tapas on the Ramblas (2005) Stain of the Berry (2006) Sundowner Ubuntu (2007) Aloha, Candy Hearts (2009) Date With a Sheesha (2010) Dos Equis (2012).