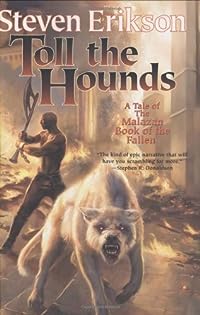 In Darujhistan, the city of blue fire, it is said that love and death shall arrive dancing.

Dire portents plague his nights and haunt the city streets like fiends of shadow.

While the bards sing their tragic tales, somewhere in the distance can be heard the baying of Hounds...And in the distant city of Black Coral, where rules Anomander Rake, Son of Darkness, ancient crimes awaken, intent on revenge.

It seems Love and Death are indeed about to arrive...hand in hand, dancing.

What People Think about "Toll the Hounds"

However, unlike House of Chains which disappointed me a lot, I actually found Toll the Hounds mesmerizing, a treasure trove for philosophies, and also one of the most rewarding books in the series so far. Picture: A fanart of Anomander Rake by artsed-d8joaqa I wont lie, a lot of the warnings about the extremely slow pacing and the overload of philosophical contentas amazing as they weretowards this entry were there for good reasons. Like the majority of the fans said, the barrage of philosophies was so extreme that it almost damaged the entirety of the book. Lets just say that because of the word of mouth I received regarding this book, I ended up reading all the slow and philosophical contents as a lesson in writings and a dissection of philosophies instead. At the same time, Erikson was capable of telling an undiminished epic fantasy quality while effectively portraying what the characters felt with minimum words. In my opinion, one of the most brilliant writing skill in this book was the way Erikson starts and ends his chapter. For example, he starts one chapter with this sentence: The soul knows no greater anguish than to take a breath that begins with love and ends with grief. This doesnt mean that there werent any new characters to find here, Erikson just wont simplify things for readers. The main difference between this book and the previous installment was that I found the new characters in this novel to be so much better to follow than the one in Reapers Gale. He absolutely nailed the last 25% with massive impact force; making the last 25% of the book the best explosive closing in the series so far; even better than the climax sequences in Memories of Ice. It was astonishing and ingenious the way Erikson unraveled everything he has prepared into the last 25% of the story. Toll the Hounds may have a lot of flaws in pacing and overload of philosophical contentsI love philosophies but anything thats too much is never goodbut overall, it was still expertly crafted.

In a series replete with epic endings, this eighth chapter of the Malazan Book of the Fallen contains, to date, the most epic one of all. It is with much joy that I can finally, upon rereading, upgrade this book as one of my favourites. Before I start my review proper, Id like to point out that reading Return of the Crimson Guards from the Malazan Empire series prior to Toll the Hounds is relevant to the timeline, both from an event and character standpoint. While the past few books gave readers an in-depth view of the Tiste Edur of Shadow, this one brought focus to the Tiste Andii of Darkness, of whom we were only given small morsels of information so far. A mysterious race, given to excessive introspection and deep melancholy, the Andii is led by an utterly enigmatic and supremely great leader, the Son of Darkness. Anomander Rake, Lord of the Tiste Andii, Son of Darkness, is in my view, one of the greatest fantasy characters that Ive ever encountered. Toll the Hounds can be called as the penultimate volume in the Book of the Fallen as the next two books, Dust of Dreams and The Crippled God, form a two-part finale. The ratings for Toll the Hounds are probably the most divergent of this series, as the pace was very slow for a significant part of the book with a greater level of dense philosophical commentary and seemingly overindulgent introspection.

Now, before you go all berserk on me I have my reasons, and let me emphasis that while I say it is the weakest book in the series it is also a great book by any other standards. Erikson has a way of befuddling the mind sometimes, and I found that happening a lot to me in this book. Now, knowing how Erikson writes, this may all come to pass with the next two books and I will probably be sticking my foot in my mouth by the end of the series, but until then. I was so glad to be back in the city of Darujhistan and with characters that got me to fall in love with this series way back in GotM. Erikson has a way of tying in events or little phrases that relate back to previous books that I really enjoy. As with all Malazan books youre going to have your share of heartache, and a great convergence at least once in every book. I know I said earlier this is the weakest book in the series, and I will stand by that. There are always going to be weaker books in any series.

"There is no struggle too vast, no odds too overwhelming, for even should we fail should we fall we will know that we have lived." Anomander Rake Son of Darkness I have just one problem with this book, and that is its slowness, this book is so damn slow, this book could have been better if it was 500 pages shorter, I will read and read yet nothing is happening, it made the reading experience not as fun as the previous ones, I have to admit I was bored at some point, which is the first time since I started this series. One we are back to Darujhistan, weve heard almost nothing from this city since GoTM, the first book, another location is Black Coral which is now ruled by the Anomander, so the Andiis live there with some humans. Characters If you are spoiler sensitive or havent read the first 7 books, I suggest you jump this section, cause even though I wont mention spoilers I would mention character names which would tell you who made it this far in the series.

This was another good instalment of Steven Erikson's fantastic Malazan series. The setting of this instalment was a big plus for me as we returned to the city of Darujistan. Plus we got to meet a bunch of fun new characters as well. Erikson has a unique and weird writing style and it took me a little bit of time to acclimatize myself with it and get sucked back into the story. I always feel a little harsh not giving some of these Malazan stories a full 5 star rating!

But in many ways, Toll the Hounds, eight book in Malazan Book of the Fallen series is the beginning of an end. Reading this book reaffirmed my opinion that all-powerful characters, such as Anomander Rake, hurts the overall quality of the story. But, at some point, this vast power, this larger than life part in the story, becomes a burden to a character. Actually, Erikson himself was quite confused that Anomandaris was received so well by readers because, like myself, he wasnt infatuated by him at all. Well, what most of us want, in any case.) And if author doesn't have other compelling stories or if he simply relies too much on a story of this magnificent character we are bound to read endlessly: "No, it's not the time; no it's not the time; and no, it's still not the time." throughout much of the 1200 pages of a book. All these stories, which served as an underwhelming supplement while were waiting well, we dont know what exactly is that were waiting all we know is that: Its almost the time., I would completely cut off, saving approximately 400 pages, without losing any thread whatsoever. Now obviously I cant talk in details about it, but Ill mention this: the main reason for me why last 200 pages kept me on the edge of my seat is mainly because of the prequels story and character Im following from them, all throughout this series, and seeing revelations and seemingly conclusion to that characters arc. In the story we have a character who dies. With Steven Erikson thats not even a spoiler, its something that we expect in each book, at every corner to jump right at us. But the way he had done it, through seemingly insignificant character and within a minor story in the book, is a masterful preparation for his readers for what is to come by the end. Too often people mistook the sadness in others for self-pity, and in so doing revealed their own hardness of spirit, and more than a little malice." Focusing so much and in so many details on this minor story and this insignificant character, and to let us grieve alongside these characters friends, feeling their pain, paying respect to their fallen comrade, going through all these stages, denial, anger, grief and finally acceptance, actually helped in accepting what is inevitably to come, on our feet, with grace. The large part of this book centers on the questions: at the very beginning of the faith, in the cradle itself, who decides what and how do we worship? First: why had Erikson decided to introduce this late in the series, practically at the beginning of the end, this change? Was it necessary; to whom actually can we prescribe this change in telling the story - this almost breaking of the fourth wall and pinching the reader on his nose while doing so? We had this character for four books and he never ventured into something similar in previous installments. But if we somehow manage to prescribe this to newly introduced character, this bard: Fisherman then I suppose we can understand shifting. But Im not sure that we can, so overall Im confused and dont understand this move Steven decided to make.

Erikson knows how make interesting character and and luckily I have good memory since there are lot of characters we haven't seen since books 1 and 3 and I was thrilled that some small events caused ripples that can be seen here.

I mean, a lot of inner thoughts, some action - and not a word about what motivated this particular character to act the way he acted. I had to read three fourths of the book to finally get some vague ideas of what was about to happen, which by that time begin to bother me. By the time I finished the book I realized the people in the whole series have no clue what preventive measures are. As soon as it happens, people finally start acting - in the very last moment, doing great sacrifices; most of these sacrifices could be easily prevented if somebody bothered to do something (fairly obvious and logical things, too) before the crisis started.

The stories were all over the place with seemingly no way to come together, and I think knowing a lot of the characters at the beginning (for once) made most of the book pretty easy to follow compared to previous books.