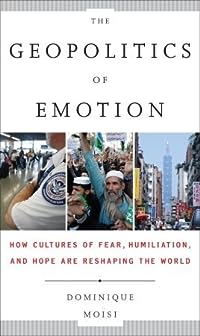 The Geopolitics of Emotion: How Cultures of Fear, Humiliation, and Hope are Reshaping the World

The first book to expose and investigate the far-reaching emotional impact of globalization.In his celebrated 1993 book The Clash of Civilizations, political scientist Samuel Huntington argued that the fundamental source of conflict in the postCold War world would not be primarily ideological or economic, but cultural.

In The Geopolitics of Emotion Dominique Moïsi, a leading authority on international affairs, demonstrates that our post-9/11 world has become divided by more than cultural fault lines between nations and civilizations.

Moïsi brilliantly chronicles how the geopolitics of today is characterized by a clash of emotions, and how cultures of fear, humiliation, and hope are reshaping the world.Moïsi contends that both the United States and Europe have been dominated by fears of the other and of their loss of a national identity and purpose.

Instead of being united by their fears, the twin pillars of the West are more often divided by themor, rather, by bitter debates over how best to confront or transcend them.

For Muslims and Arabs, the combination of historical grievances, exclusion from the economic boon of globalization, and civil and religious conflicts extending from their homelands to the Muslim diaspora have created a culture of humiliation that is quickly devolving into a culture of hatred.

Meanwhile, Asia has been able to concentrate on building a better future and seizing the economic initiative from the American-dominated West and so creating a new culture of hope.Do these emotions represent underlying cultural tendencies characteristic of particular regions and populations today?

What People Think about "The Geopolitics of Emotion: How Cultures of Fear, Humiliation, and Hope are Reshaping the World"

In The Geopolitics of Emotion: How Cultures of Fear, Humiliation, and Hope Are Reshaping the World, Dominique Moisi tries to explain the state of conflict in international relations through an exploration of human emotions. The world, the nations and countries of the world, can be divided into groups of people who embrace a culture of fear, humiliation or hope. In discussing the culture of hope, Moisi talks about the peoples in China and India, and their striving for a better world, although some times at the cost of frictions with others. Unable to cope with the advent of modernity, the Middle Eastern people are constantly feeling humiliated by the tragedies and losses that they have suffered, including the creation of the Israeli State and the continued meddling of the United States in regional politics. In responding to the cultures of fear and humiliation growing in various parts of the world, the West (Europe and the United States) have become regressed, developing a culture of fear. What Moisi tells us is that regardless of power (no matter how powerful or seemingly powerless people are) or the relations among powers in the world, friction and conflict comes from differences in emotions. That, at the end of the day, our world would be a better place if fear and humiliation could be supplanted with the feelings of hope.

Dominique Moïsi is offering his analysis of different cultures through assigned emotions: the culture of hope for Asia, the culture of humiliation for the Middle East and Muslim dominated the world, and the culture of fear for Europe and the United States. Notwithstanding that this book takes charge of three primary emotions (hope, humiliation and fear), the author indirectly explores the notion of confidence, which is the defining factor in how nations and people address the challenges they face as well as how they relate to one another. The last chapters of the book are hilarious as Dominique Moïsi offers two visions of the world in 2025 in form of parody: one dominated by the emotion of fear and humiliation and the other one fostered by the emotion of hope.

In his attempt to make the book accessible by many, Moïsi fails to provide any sort of ontological and methodological justification for his project. Speaking of the conceptual proposal, Moïsi fails to provide any adequate backing for his thesis. I am saying this from the perspective of an aspiring scholar already convinced of the relevance (and primacy) of emotions in international relations, both theoretically and practically. All in all, I feel that this book tries to present a social constructivist thesis that sometimes aspires towards post-modern readings, but more often falls into considering classical realist conceptions of power.

There was some thought-provoking content here, and some real potential in adding this as a tool to the way we look at the nations in the world around us. I feel Moisi really left a lot of the potential of the topic untouched; in the introduction he outlined some possible ways to begin to study and quantify emotion in different countries, but his analysis barely touched these. And the possible quantifiers he mentioned, even if he had analyzed them thoroughly, are very weak.

Moïsi, in fact, calls himself out very early in the book in this regard and says that he will be arguing his point relying almost entirely on his emotional feel for particular countries and cultures rather than relying on statistics, polls or any other sort of scientific investigation. The Middle East and countries largely inhabited by Muslims are going through an extended period of humiliation, mostly due to the fact that Christianity, the primary religion of Western culture, is currently calling the shots. The heavily religious United States is involved in many operations in the Middle East, calling for western principles of democracy and the free market, though not to the sounds of universal cheers and Israel does nothing to help the situation.