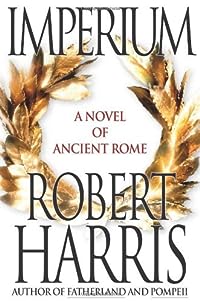 Imperium: A Novel of Ancient Rome

When Tiro, the confidential secretary (and slave) of a Roman senator, opens the door to a terrified stranger on a cold November morning, he sets in motion a chain of events that will eventually propel his master into one of the most suspenseful courtroom dramas in history.

The stranger is a Sicilian, a victim of the island's corrupt Roman governor, Verres.

Compellingly written in Tiro's voice, Imperium is the re-creation of his vanished masterpiece, recounting in vivid detail the story of Cicero's quest for glory, competing with some of the most powerful and intimidating figures of his -- or any other -- age: Pompey, Caesar, Crassus, and the many other powerful Romans who changed history.

What People Think about "Imperium: A Novel of Ancient Rome"

I did appreciate that this book lent itself extremely well to audio because the story is VERY easy to follow and the narrative is not jammed with dense exposition that would require careful reading. This is the first book in a trilogy set in ancient Rome during the time of the First Triumvirate (i.e., Julius Caesar, Pompey and Crassus). By the way, I could have just said ancient Rome but Triumvirate is such a tasty word that I thought it needed some air time. Anyway, the story is a fictional biography centering on the legendary orator, Cicero, as told by his private secretary, Tiro. The book is certainly not a mechanism for one to obtain a detailed, historical account of life in ancient Rome, but since I didn't expect it to be I was not disappointed.

The book deals with the fascinating life of the political animal and great thinker, Marcus Tullius Cicero. These scenes are brought to life magnificently so that at the end of the carefully staged rhetorical and theatrical interventions (then by Cicero, now brought to us by Harris), we are ready to burst out clapping. Anyway, what withholds the fifth star is that Robert is Harris and not Graves. Instead, what does circulate through Robert Harriss veins is Politics.

I read a reasonable amount of non-fiction to fill the gaping holes in my knowledge but once in a while I like to pick up a book by someone like Robert Harris who is able to mix history with a little imagination. No, Harris (and his like) fill the gaps with what they imagined was done and said by the real-life protagonists and weave this into a proper story. In effect, the author has mixed known historical events with fragments of real speeches and extracts from letters to weave a compelling account of this time.

Harris has done something really smart here: if he'd published a three-volume biography of Cicero, no one would have read it. It's a clever gambit by Harris; it allows him, among other things, to slyly inform you when the passage you've just read is the actual transcript of Cicero's speech, which happens often. I researched it as best I could, and it looks like the behind-the-scenes maneuvering was over other things entirely.

Since I was originally seduced into my passion for learning about the Roman Empire by Colleen McCullough and her "Masters of Rome" series of novels, I naturally began this investigation of the life of Cicero with misgivings since Cicero is less than heroic in McCullough's books that tend to present Julius Caesar as the more admirable character. Harris does not really change that perception of Cicero so much as provide the context for his opposition to Caesar and his fated alliance with the optimates, the group of aristocrats who formed the core of the faction that opposed Caesar in the senate and eventually, the civil war. He was appalled when Pompey pressured him to support Pompey's own attempt at wresting control of the empire from the aristocrats of the senate (years before the civil war with Caesar) with his campaign for the award of sweeping powers to eliminate an upsurge in pirate activity. It must have seemed hipocritical to Cicero later when Pompey and the optimates opposed Julius Caesar on the grounds that he was attempting to take sole control of the empire, although the book ended with Cicero's election to consul. In "Imperium" however, Harris makes a plausible case for the aristocrats' fear of absolute power that Caesar would gain through the patron-client relationships that would result from land redistribution. Harris presents an absorbing study of politics and the culture of power in the late Roman Republic and I find "Imperium" to be a worthy successor to Harris' "Pompeii".

This is the first book in a series of three about Cicero (106 B.C. Here in the first we follow his career from senator to praetor to consul, ending in the year 63 B.C. His close friend, private secretary, slave and scribe, Marcus Tullius Tiro ( circa 94 B.C. Imperium, the title of the first book, is a Latin word. Yet Cicero was a Roman, and his career as a statesman is one about political maneuvering and power. The focus shifts from the wisdom and teachings of Greek civilization to the power and politics characteristic of the Roman Empire. Trained in the art of oratory he still had to maneuver in the politically controlled world of Rome. Ciceros skill of oratory is mirrored in the lines of this book. I wish an authors note, distinguishing between what is fact and what fiction, had been added, and in some way those lines that are quotes of Cicero should have been made identifiable. The oratory impressed me; the politics confused me.

Robert Harris has Tiro, Cicero's scribe/clerk, writing the linear in time progressions of his younger "coming up" to power years. It holds those eyes and hearts of Roman sensibilities during change in the republic, both in its aristocrats, and in its plebs - incredibly well. Most historical novel lovers probably will not enjoy this as much as I did for those very reasons, but I'm sure they would still appreciate the scale of the read toward certain aspects of Cicero's core. It's what the law states and how that law's transgression is judged. Rome and the Empire as it existed with Pompey, Crassus, Catalina and numerous other characters of more infamous names before the changes that ended a republican form and tumbled to a emperor instead.

I was reading a biography of Julius Caesar after having watched some episodes of Rome, a rather bawdy but interesting version of the rise of Octavian in which Cicero plays a prominent, if cheesey role, so I knowing Harris through some other books, I grabbed this one. For example, Crassus, bringing his army back to Rome, crucified 6000 prisoners, slaves, along more than 300 miles of the Appian way, spacing he crosses about 17 to the mile, as a warning to any future Spartacus who might wish to revolt against the imperium. (From the Third Servile War - https://en.wikipedia.org/wiki/Third_S...) Harris shows an intimate knowledge of Rome and its history managing to portray all of it through the legal battle between Cicero and the great legal mind of Hortensius (who defends the role of rhetoric in Ciceros Hortensius) the famous advocate in a trial in which Cicero defends a friend from Gaius Verres, a disreputable and thoroughly corrupt Senator (all historical figures.).

The book is written in an endearing style and the word I often used while reading it was 'jolly'. Tiro recounts his life from a young man to a great age as he served Cicero - not as a freeman but as his slave - and aided him in his passionate rise from Senator to...well...I can not really say can I? Cicero's rise through the ranks of Roman political theatre is one you must experience freshly through the book alone, if you choose to read it. I felt the book was let down by it having been split into two very different halves. But how could I give 3 stars to a book that amused me as much as this one?