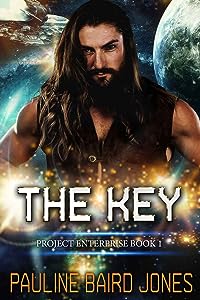 An Air Force pilot - the best of the best to be assigned to this mission - Sara isn't afraid to travel far beyond the Milky Way on an assignment that takes her into a galaxy torn apart by a long and bitter warfare between the Dusan and the Gadi.

After she's shot down and manages to land safely on an inhospitable planet, Sara encounters Kiernan Fyn - a seriously hot alien with a few secrets of his own - he's a member of a resistance group called the Ojemba, lead by the mysterious and ruth Kalian.

A mysterious, hidden city on the planet brings Sara closer to the answers she seeks - about her baffling abilities and her mother's past.

The Dusan and the Gadi want the key.

They think Sara has it.

What People Think about "The Key"

The Key did include the cussedness factor (especially seen in the heroine) but nothing clever is required of the brave Americans. Set in current time (or only slightly in the future) on an exploratory mission to another galaxy, the US Air Force encounters aliens. Some alien races are exceedingly hostile. All alien races are humanoid I could see no real difference between us and them. Captain Sara Donovan falls in love with one alien when she crash-lands near his cave. (But still, it was an entertaining scene.) Together, Sara and Fyn take out the hostile aliens, with the "freaking magic" Sara employs, and via the help of some likable secondary characters: The Doolittle Commander (aka The Old Man), Lieutenant Carey, Briggs, Hawkins, etc. Sara drags her foster-home upbringing into the story numerous times. I would give The Key three stars, but the typos (12+), the abbreviations (FM = freaking magic, SOP = standard operating procedure) and the jargon diminished the reading experience for me ("delta sierra" means dumb shit, a "foxtrot" is the F-word, a "zoom bag" is a flight suit, a "gut bomb" is a meal, and "kick trash" is kick ass). Also, given that the story is set in a galaxy far away, I found the ongoing references to American pop culture distracting.

The universe the author created was beyond what I was able to believe and the male chauvinism (supported by the protagonist many times) was also frustrating.

Core Punch is a spinoff of not one but two of Jones series; Project Enterprise and The Big Uneasy. The crew of Project Enterprise, which in this story is a group of ships, and not just one intrepid explorer, has definitely gone where no Terran has gone before. The Key to the story, and to the intergalactic hi-jinks that ensue, is Captain Sara Donovan, a hot shot Air Force pilot who joined to explore new worlds meet new people, and kill them. Mostly Sara just wants to fly fast and far. Sara just wants to fly. Escape Rating A-: The Key is a huge, sprawling space opera of a book, so be prepared to wallow in the pleasure of exploring this universe for a good long time. Sara is a terrific heroine, not just because she seriously kicks ass, but because all of her actions, even the ones she isnt conscious of, have incredibly good reasons behind them. Speaking of Saras country, she really is a U.S. Air Force Captain. While I like Fyn, a lot, he does fill the role of alpha male with big secret more than he stands out as an individual. The role that Sara both fulfills and subverts reads a bit like Gillaine Davre in Linnea Sinclairs An Accidental Goddess.

The main character in The Key is Captain Sara Donovan. We meet her after she's crash-landed on a planet and been rescued by a good-looking, though not-much-one-for-words, alien named Fyn. Sara and Fyn quickly became two of my favorite fictional characters. Sara is strong, smart, sassy and, since this is science fiction, more than your average female.

I want to bask in one of the most fun, and somehow unique, books I've read in a long time. Oh, yeah...and there is a really sweet love story going on here, too.

I was never able to get a firm picture of Fyn in my imagination, but I'm assuming he's super hawt. The action was believable and intense, though I don't know what the hell wars in space would actually be like anyway. My only real complaint was that the two different bad guys used the same ploy and the good guys fell for it both times. Like the author felt the ruse was so good the first time, she'd just use it again instead of coming up with a new idea. Quite enjoyable and exactly the type of story I wanted to read.

ByTessaTOP 50 REVIEWERon 25 June 2018 Format: Kindle Edition Captain Sara Donovan is a fighter pilot with the US Airforce; only, in this case, it should be called a Space Force. Sara is a bright, bubbly personality who has absolute trust in her people and reassures Fyn that they will come for her and he can be rescued with her. The romance between Sara and Fyn is an integral part of the story without being in any way explicit.

When Sara Donovan, an elite pilot, is shot down she finds herself alone on an inhospitable planet with Fyn, a member of the Ojemba (a resistance group aiding the Gadi against the evil Dusan).