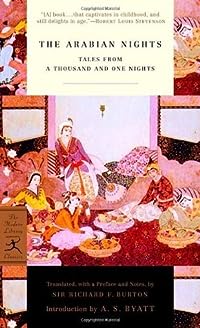 From the epic adventures of "Aladdin and the Enchanted Lamp" to the farcical "Young Woman and her Five Lovers" and the social criticism of "The Tale of the Hunchback", the stories depict a fabulous world of all-powerful sorcerers, jinns imprisoned in bottles and enchanting princesses.

What People Think about "The Arabian Nights"

Burton is always present in the text, leading us by the hand through his favorite passages, flooring us with a jaw-droppingly inappropriate comment one moment (it isn't sexist or racist: it transcends sexism and racism) and then turning round a second later to hit us with a marvellous piece of poetry or romance or heroism, crowing over his rivals' mistakes, inserting irrelevant anecdotes or obscure pieces of etymology that he just couldn't resist, showing off his knowledge of the seventeen languages he speaks fluently and the others that he just has a passing acquaintance with.

I spent a year reading this book. He used to read dirty books in the bath and leave them in the airing cupboard to dry out.

Depicting a woman of such high wit and education is hardly misogynistic. The stories themselves are full of women who outsmart the men who suppress them. If anything, the women in The Arabian Nights come off as being considerably more worldly than their male counterparts. This strategy might have relieved some of my own "tedium" since the stories get considerably longer as the work progresses. But it is a book of stories.

She asks to be the next wife of the sultan, and she starts telling him a story on their wedding night. The biggest part of the book is the stories Scheherazade tells the sultan. I can't say that I know enough about the culture to comment on what's changed and what hasn't, but these stories do give you a little idea of what life is/was like in the Middle East and where they're coming from.